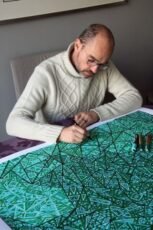 Gregory Dubus is a French artist living in the Netherlands whose artworks are displaying originality, uniqueness, remarkable aesthetic and higher technical and creative standard.

His structural compositions are a praise to Geometric Abstraction and most particularly to the triangle shape inviting the viewer to experience a reflective and emotional peacefulness mindset.

His art is colorful and exigent because it requires lot of patience, rigor and precision. It also represents his personality which contains a duality of concepts that he is trying to make coexisting in harmony: Feelings vs thinking; Simplicity vs complexity; Monotony vs diversity; Facility vs difficulty; Planning vs spontaneity; Visible vs invisible; Conscious vs unconscious; Effort vs ease…

His art has been influenced by the abstract art movement called ‘Suprematism’, by the coloring he loved doing during his childhood and by a few famous abstract artists like August Herbin (forms and colors), Piet Mondrian (lines and structures) and Victor Vasarely (organization and movements).

He is a permanent member of a major gallery in Europe specialized in Geometric Abstraction called ‘Bos Fine Art’ based in the Hague, where he regularly exhibits his artworks. He also participates to exhibitions in other Art galleries (ex: Lisbon in May 2021).
In 2018, he became finalist for the ‘Artist of the Year Award’ of an International Foundation for the Arts and one of his artworks can be seen in the permanent exhibition of the Geometric and MADI Art Museum in Dallas (USA).

‘Gregory Dubus’ artworks scan be seen as a choreography in which the lines and colors come, in harmony, to match each other. The space is little by little invaded by the movement of forms that leave no frame, no immaculate space, or even silence in support of this ballet. The predominant lines are made freehand according to the artist’s intuition. In a maze of corridors, of strong lines and colors, each structure deploys its own entity. Every work produced retains its uniqueness, just like the momentum that dictates the course that the work will take at the beginning of its conception.

Hypnotic, these plastic productions take in some points the form of an automatic writing that the artist lets instinctively unfold under our eyes. Then, stands a topography, like a collection of geometric shapes which would join the codification attempts, color-form correspondences and letters of the abstract painter Auguste Herbin and his attempts to transcend pictorial forms.

The thoroughness and concentration required by this process immerses the latter and anyone who observes the drawing in progress, or completed, in a form of unconscious or can be, on the contrary, in a form of mindfulness. In this, his technique could be akin to a meditative, solitary act, which can be like the one induced by the realization of mandala but can especially be heard and understood as a form of language, a bridge of communication between him and those who watch.

His technique requires consistency and precision and requires, for this autodidact, sometimes up to hundred hours of production for a piece. This endurance perceptible when reading these micro-architectures is therefore achieved in patience and in apparent effort, in fact delectable for the artist. It is a kind of bodily or spiritual elevation whose self-denial would be the watchword.

The artist perceives in the stability of the triangular shape and its multiple representations the parental basis and transmission. With at its peak the fruit of opposing characters of which it is the heritage. This symbolized duality becomes only one -complementary and essential- at it submit. This symbolic force attributed to his work decides the artist to evoke, today, the term self-portrait to speak of some of his pieces. The triangle has heavy and lighter meanings, in one of its most positive aspect it is regularly attributed to determination. A resolution like Gregory Dubus’s creative act that build line after line the foundations of these colorful architectures.’ 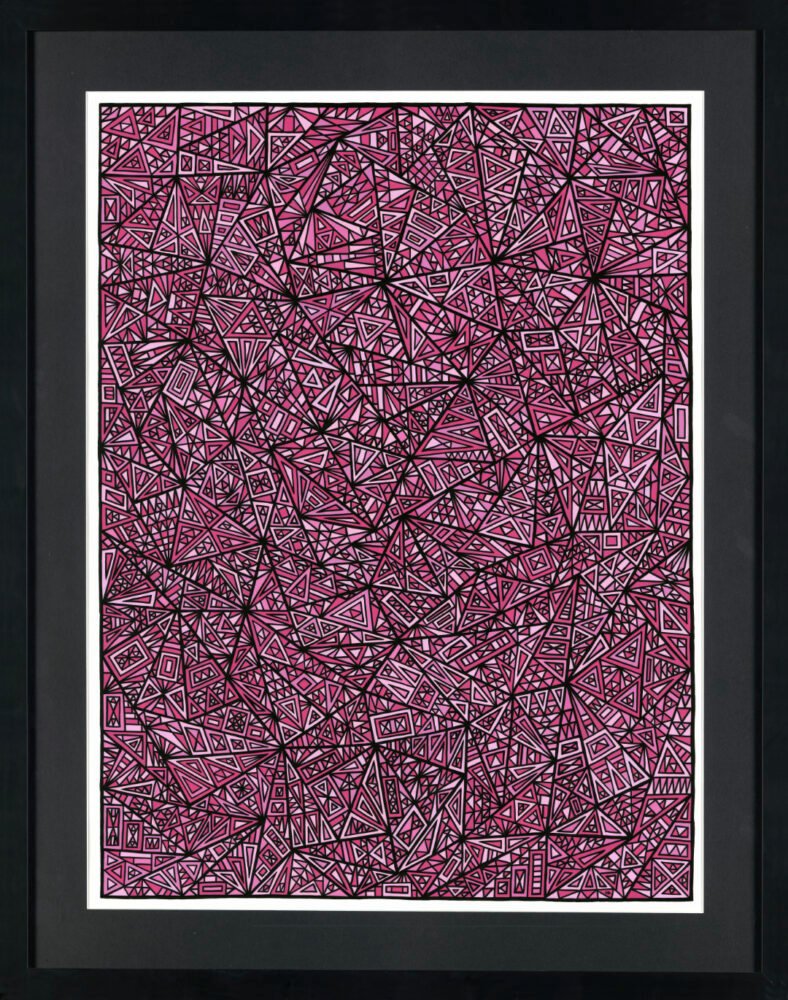 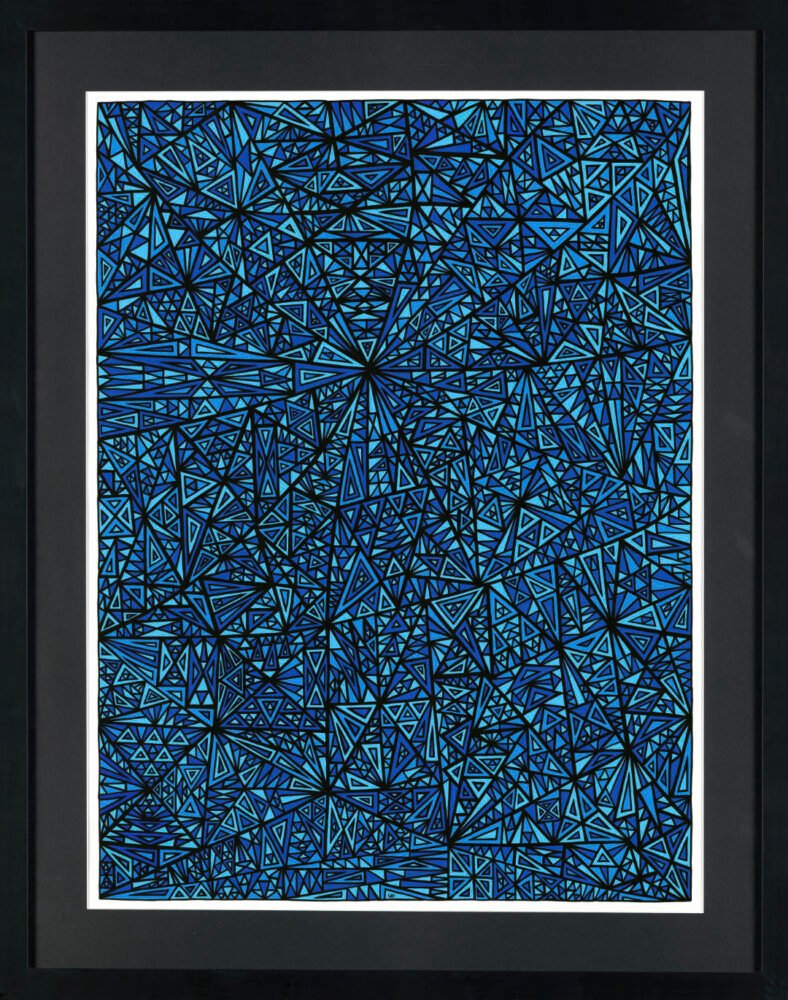 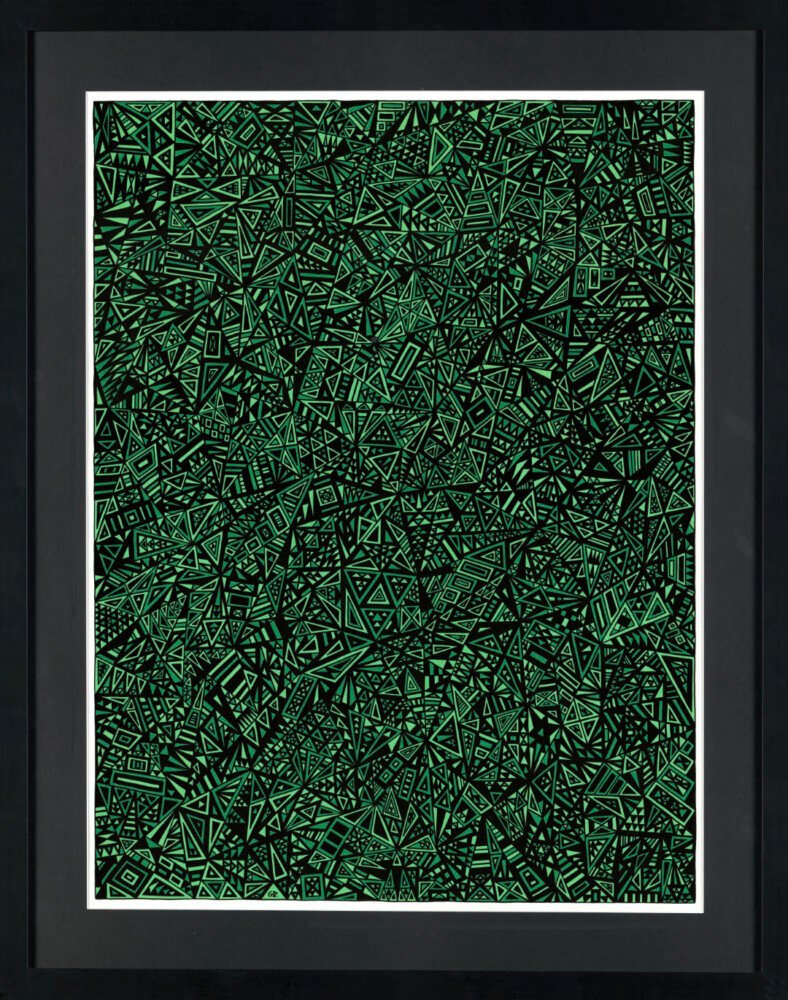